FREE SHIPPING ORDERS OVER $150.00
NO DUTIES, NO BROKERAGE, NO HIDDEN FEES - ALL ORDERS SHIP FROM OUR LIMOGES, ONTARIO WAREHOUSE

Skip to the end of the images gallery

Skip to the beginning of the images gallery
Details

Keeping Oil Out
Keeping oil out of the engine intake tract is extremely important towards preventing premature mechanical failure and maintaining performance. Oil in the intake tract of the engine has several detrimental effects. First, the oil coats the internal portions of the intake, intercooler, and piping. This oil may cause premature failure of rubber or silicone hoses, which leads to failed connections.

Version 2 vs Version 3 IAG AOS
The most popular Subaru AOS is now even better! The IAG AOS body is completely redesigned using cast aluminum and features an integrated coolant passage for better heat retention. Additionally, the V3 AOS heating system is upgraded by relocating the coolant lines to the bottom of the body using new swivel fittings, heat sleeving and an integrated coolant bleeder. These heating system upgrades will allow for a cleaner installation and less condensation buildup in colder climates. The new compact body has the same 1-liter capacity as V2, but features a sleeker design and adds removable ORB fittings for greater versatility.

Notice the dual breather port? At first glance you might think this is excessive, however, our reasoning is grounded in simple physics. As air and particles of oil enter into the AOS, the largest particles of oil will collect on the inner surface of the can and drain to the bottom, but the smallest particles will remain suspended in the pressurized stream.

As the air makes its way through the multi-stage baffle system, gravity pulls oil from the air. By increasing the overall volume of the breather opening on the top of the AOS, we have drastically decreased the exit velocity of the crankcase vent (CCV) stream. The slower velocity leads to greater oil separation from the pressure stream. A total of 20 mounting holes enable the breathing port a full 360° of rotation. On the top, a thick Viton o-ring seals the can. Every o-ring in our AOS is formed from Viton which offers superior temperature and chemical resistance.

The Subaru EJ engine has 3 ports that vent crank pressure: one on each cylinder head, and another on the top of the block. Each engine vent port receives its own connection to the AOS. By giving each engine port its own entrance to the AOS IAG has allowed for more effective and faster excavation of crankcase pressure. Additionally, this reduces overall system pressure. The AOS has an approximate 1 liter of holding capacity. The larger the AOS, the more power you can safely make in competition applications without having to worry about the AOS overfilling.

The bottom of the AOS is shaped like a snail, redirecting positive crank pressure into the same swirl pattern produced by the 3 side ports. This allows maximum oil drainage, while separating oil from the air in all the venting ports.

Why not use a catch can? Catch cans require regular maintenance and manual draining for proper operation. If the catch can is not drained often it may reintroduce oil into the intake when it overflows or create a mess in the engine bay.

The IAG AOS collects oil and actively drains the oil to the crankcase. The drain port is under the same crankcase pressure as the other ports that are on the side of the AOS. Under normal, off boost driving the weight of the collected oil will easily overcome the pressure in the drain line. However, under heavy boost (especially on higher powered competition engines) the crank pressure will push back up the drain with the same air/oil mixture that is seen on the side ports. The unique snail design allows the system to breathe without disturbing the swirl pattern.

The body of the IAG V3 AOS features an integrated coolant chamber that heats the entire AOS to the same temperature of the engine. This cast aluminum can holds more heat which maximizes the evaporation of any condensation collecting inside of the can. The hotter the AOS, the less condensation will collect inside and mix with the oil.

The center bracket allows for adjustable mounting. If your engine bay changes, you can easily change how and where you mount the AOS. The V3 AOS body features a greater number of mounting holes enabling a wider range of adjustment. A single, laser-cut, mounting bracket is included that fits nearly all applications and configurations.

A laser cut harness relocation bracket is also included. The bracket allows the engine harness connector to be moved forward for additional clearance.

AOS IN THE BOX

FAQ:
Q: Why do I need an AOS?
A: In stock configuration, the un-baffled crankcase pressure is re-circulated back into the intake stream.

This can be harmful for two reasons:

Q: What are the factors that cause oil in the crankcase vent system (CCVS)?
A: There are a variety of factors that determine how much oil will be in the CCVS. The most significant of these factors are boost pressure, piston to cylinder wall clearance and oil viscosity. Smaller factors include ambient temperature, engine temperature, piston ring condition, and valve guide condition.

Q: What's the difference between a catch can & the IAG AOS?
A: Catch cans are an air/oil separator that does not actively drain the collected oil back into the engine lubrication system. Most catch cans require you to drain the contents out manually. By nature, a turbocharged boxer engine will produce significantly more oil in the CCVS than other engines of similar displacement.

Q: Which AOS is right for my vehicle?
A: The Street Series AOS maintains or improves the functionality of the original PCV system and may be installed on street driven vehicles subject to EPA emissions standards. The Street Series AOS provides optimal oil separation and venting performance for vehicles, including unregulated competition applications, up to 600 WHP and those fueled by E85 or other high-ethanol fuel blends. The Street Series AOS protects from ethanol caused oil dilution and resulting extremely frequent oil change requirements. Pulling vacuum via the Street Series recirculating design to the inlet is ideal for ethanol fueled competition vehicles, removing ethanol vapors from the crankcase and returning them to the intake system for complete combustion. Please note that the IAG AOS is not compatible with most aftermarket strut tower bars. 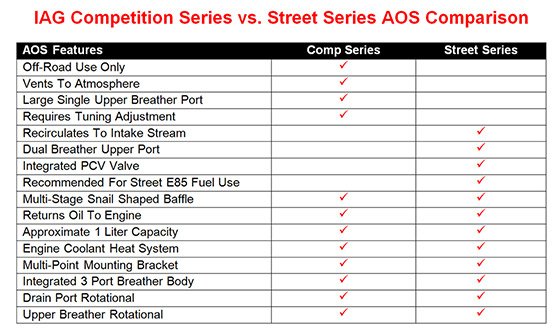 Reviews
Write Your Own Review
Fitments